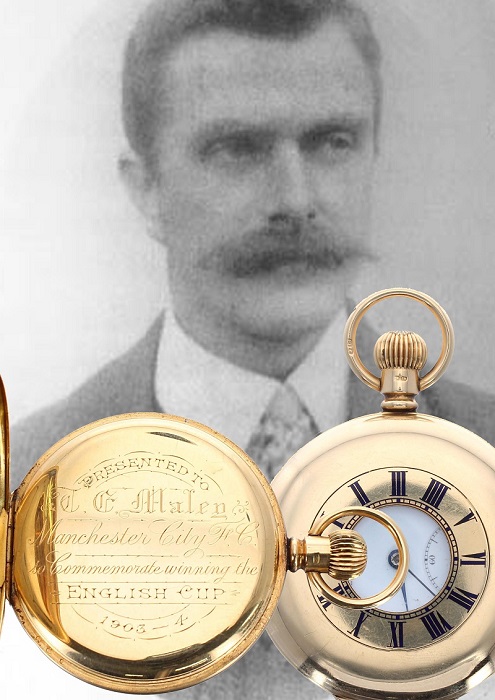 Important Piece Of Manchester City FC History up for Auction

A pocket watch owned by the man who won Manchester City its first FA Cup and was then banned from football for life will be auctioned in Wiltshire next week just days after City play in the FA Cup final against Watford.

The watch, presented to Manchester City manager ‘Handsome’ Tom Maley in 1904 by the fledgling club’s supporters, a year before he was implicated in a bribery scandal, will be sold by Gardiner Houlgate auctioneers in Corsham near Bath. It is expected to fetch in the region of £5,000–£10,000.

The gold half-hunter watch, which bears an inscription to Maley from fans, was given to him following the club’s first FA Cup win in the 1903–4 season.

The watch is being sold by a private collector who was formerly a secretary with the club. It has been held privately for over 40 years and has not been seen by the public. The vendor is keen for the watch to be passed onto a keen collector or a Manchester City fan.

Director and auctioneer David Hare, who will sell the watch, said: “Tom Maley’s watch is an important piece of the archive history of Manchester City. We’re expecting a lot of interest from fans and perhaps even the club itself. Its provenance is also excellent.

“While the watch is not unusual for its period – an early 20th century 18-carat gold half-hunter made ironically in Liverpool – it’s as piece of sporting memorabilia that it has real value.

The story of the rise and fall of Tom Maley’s smacks of Greek tragedy.”

Tom Maley was born in 1864 and played football for a number of Scottish teams including Celtic. After retiring as a player, he joined Manchester City as manager in the 1901-2 season, just seven years after the club had taken the name and one year after it joined the Football League. Maley guided the club to its first major win: the FA Cup trophy in 1904. However, in 1905, he was banned from football for life. Maley was accused of overpaying his players the maximum £4 per week wage and ordering one of his players to bribe an Aston Villa player with £10 to throw the final league match of the season. Maley died in 1935 and is buried in Glasgow.

According to Manchester football historian Gary James, Maley should be remembered as Manchester City’s first great leader. Had his ban not occurred, it’s highly probable Maley would have brought the League title to the club.

Tom Maley’s gold pocket watch will be sold alongside hundreds of other timepieces on Wednesday 22 May.