Purchased in 1966, by the owners wife for the sum of £69.10, a hefty sum back then. It has remained in the family since and worn regularly, having a couple of services during this period. Thankfully, despite the owners complaints, the rare Explorer dial was left untouched and not replaced. What an expensive change that would have proved!

This fine example is very similar to that of the one sold in May for £192,000, almost identical, but not quite the same.

The model is the slightly later 5513 version and dates 1963 opposed to 1962. The dial is also a different variation, the white ‘Swiss’ dial with the very rare upper underline, so rare that only a few examples have appeared on the auction market in recent times. 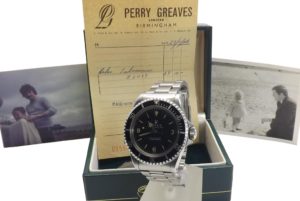 This watch was purchased from Perry Greaves Limited, Birmingham on the 28th May 1966 for £69.10. It was a gift from the vendors wife just before the birth of their first child born in October 1966.

Complete with the Rolex box, purchase receipt, spare bezel and plexi-glass which were replaced during a previous service; also two family photographs depicting the vendor wearing the watch in 1967/68 and 1977.

These rare Rolex Submariners with Explorer dials were believed to be produced in very small numbers during the late 1950s and early 1960s.